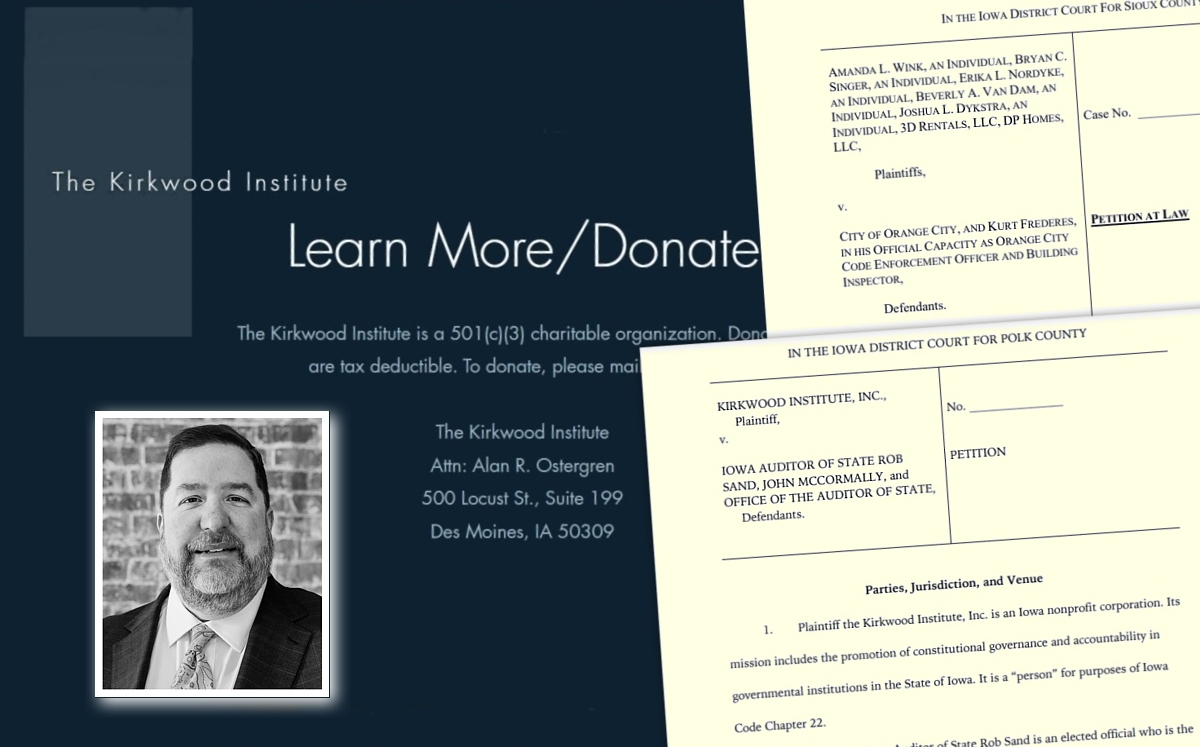 Over the past two years, a series of lawsuits have been filed in Iowa courts by a man who says he wants to create a “conservative legal movement” in Iowa through civil litigation.

What is unclear, however, is who is funding all the lawsuits.

In 2018, Ostergren was reelected to a third term as the county’s top criminal prosecutor, but he did so with a narrower margin of victory than he would have liked.

A Republican, Ostergren says he had “a little ‘blue wave’ on my shoes and it almost pulled me down.” The experience caused him to take a step back and reevaluate where he was in his career. As part of this process, he recently stated on the Iowans for Tax Relief Podcasthe told his conservative friends about Republican Governor Kim Reynolds’ narrow victory that year over Democrat Fred Hubbell.

“The question I asked my friends, and started thinking to myself, was, ‘Who would have been willing to sue Governor Hubbell on day one, to block the executive’s excesses and the Abuse of the Laws Passed by the Legislative Assembly? And the answer was, ‘No one.’ I think he would have taken a victory lap and we would have tied our shoes, and we would have been in a bad place. I started thinking about it: Why don’t we have a conservative legal movement in the form of a public interest law firm here in Iowa? And I realized that we didn’t have that and we needed that.

That realization, he said, led him to resign as county attorney in early 2020 so he could form the Kirkwood Institute, a one-person litigation firm specializing in conservative causes.

The institute describes itself as “non-partisan” and it is recognized by the IRS as a tax-exempt public charity. But the institute also calls itself a “conservative public interest law firm,” and it does not publicly disclose its expenses or the source of its income like many public charities do.

For the past two years, the institute has opposed mask mandates in schools; sued the city of Cedar Rapids for “discrimination” against white people in appointments to a Citizen Police Review Board; represented Reynolds in litigation in the fight to impose new restrictions on abortion; sued the state over licensing board requirements; sued the state’s auditor, a Democrat, for access to office emails; sued the state over a gender quota used in the selection process to fill vacancies on the state Judicial Appointments Commission; and sued Orange City for its mandatory inspection of rental properties.

As a private attorney, Ostergren has represented Republican congressional candidates in court, as well as Republicans who challenged U.S. Democratic Representative Abby Finkenauer’s efforts to appear on the U.S. Senate primary ballot this year, and he has sued an Iowa school district over its mask mandates.

The law firm is a charity supported by unknown donors

So who pays Ostergren’s salary at the institute and funds all of his litigation?

Ostergren told the Iowa Capital Dispatch on Tuesday that he receives no remuneration from the institute, but he declined to specify the source of his income. “I will keep my personal data private,” he said. “I did not receive a salary from the Kirkwood Institute.”

With respect to institute income and expenses, most charities report this information to the IRS on Income Tax Form 990, which is open to the public – but they only do so if their gross receipts exceed $50,000 per year. Ostergren said the institute’s total annual income is less than that. (The organization’s website directs supporters to a site that displays a fundraising goal of $50,000 with a $500 donation received so far.)

When asked who exactly was funding the litigation, Ostergren said, “We have support from individuals, mostly,” although he declined to elaborate.

State records show that two of the four Kirkwood Institute board members help run Iowans for Tax Relief, a Muscatine-based conservative organization that reported $532,000 in income in 2020.

Ostergren himself is listed by Iowans for Tax Relief as one of its “contributing researchers”.

When asked if Iowans for Tax Relief or his foundation funds the Kirkwood Institute, Ostergren replied, “You know, they’re good friends, but I’m not going to discuss who the contributors are, who the donors are, for Kirkwood Institute. You know, we comply with all the requirements to complete our tax forms accordingly. »

Other board members of the Kirkwood Institute are Ed Bull, currently Marion County District Attorney, and Matthew Schwarz, a former Muscatine police officer who now runs Schwarz Forensics in Ankeny. At one point, Ostergren was director of operations at Schwarz Forensics.

The Iowa Capital Dispatch could not reach any of the board members for comment Tuesday.

Ostergren says that while the institute is still a small “rough” operation, he hopes to see it grow.

On the Iowans for Tax Relief podcast, he also spoke about the need to continue “pursuing conservative victories” through the use of Iowa’s court system.

“I think it’s really important that on the left they know that we’re going to use the resources of the court,” he said. “And it’s not because they’re stacked to our advantage. This is because when you look at how some of these programs are developed or implemented, they are contrary to fundamental constitutional principles and cannot stand up to scrutiny.