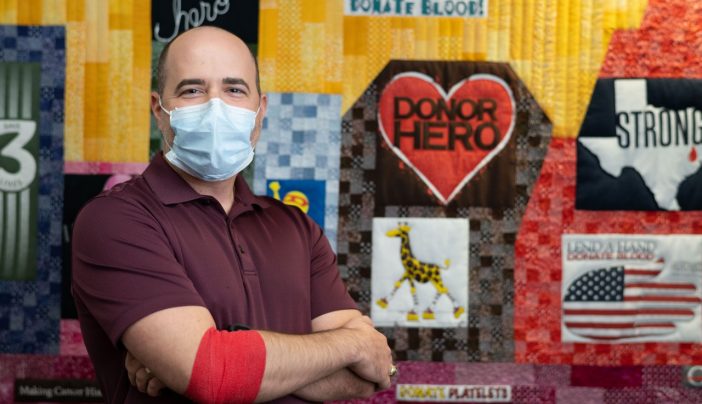 Blood donor: why I donate to MD Anderson

Growing up, Ross Robinson knew that the type O negative blood he and his family shared was special.

“I’m a universal donor, so I know I should donate whenever I can,” he says. O-negative is known as the universal blood donor because O-negative red blood cells are compatible with all other blood types and can be transfused to patients of any blood type.

“I thought it was for a good cause, and it was still a low-risk proposition for me,” Ross says.

When the COVID-19 pandemic began, one of the effects of business and school closures, coupled with stay-at-home orders and new necessary safety measures, was a nationwide shortage of blood donations. Many cancer patients depend on blood donations at some point during their treatment, especially those with blood cancers, such as leukemia and lymphoma.

When MD Anderson launched an awareness campaign about the critical need for blood donations for cancer patients, a social media post shared by a friend of Ross who worked at MD Anderson caught his eye. He had always known that his blood donations were helping someone, somewhere, but he had never thought about where he was giving before.

A family connection to cancer

Part of the reason it hit home for Ross was because his mother, Leanne, underwent breast cancer treatment at MD Anderson twice. Although she never needed a blood transfusion, Leanne underwent several surgeries during her treatment and recovery, with Ross by her side every step of the way. Leanne is now several years away from treatment and is doing well.

“I know how difficult it is for patients and their families to go through cancer treatment,” says Ross. “Everyone knows someone who has had cancer – it affects us all. Knowing that I am doing something to help cancer patients makes me feel good.”

How to donate blood at MD Anderson

Ross has been giving blood to MD Anderson for two years now. As an O-negative donor, her optimal donation type is a double red blood cell donation, a type of apheresis donation that takes two units of red blood cells and returns the platelets and plasma to the donor. Because this type of donation takes longer, Ross usually schedules his donation at MD Anderson Blood bank on Holly Hall Street at the Texas Medical Center on a Sunday afternoon, when he doesn’t have to worry about work or traffic.

“All I have to do is dedicate some time to something that saves lives,” Ross says. “It’s just the right thing to do.”

The MD Anderson Blood Bank Location at 2555 Holly Hall St. is open seven days a week from 10 a.m. to 5 p.m. and has free parking. MD Anderson also holds regular blood drives in the community and at our locations in The Woodlands, West Houston, Sugar Land and League City.